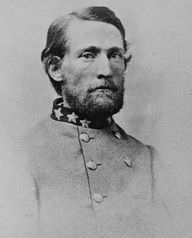 Dubbed “Gray Ghost,” John Singleton Mosby was one of the most fierce confederate rangers and army commanders during the “American Civil War.” His guerrilla band, “Mosby’s Rangers,” were noted for causing frequent attacks that disrupted “Union” supplies in Virginia during the war.

He was born in Powhatan County, Virginia. He is an 1852 graduate of the University of Virginia. During college, he shot at and injured some students, but the state legislature eventually overturned his resulting imprisonment sentence.

Mosby was called to the bar in 1855, practicing law until 1861, when he enlisted in the Confederate Cavalry when the American Civil War broke out.

Beginning in 1863, he commanded the 43rd Battalion, popularly known as the “Mosby’s Rangers.” Their most famous escapade occurred on March 9, 1863, at Fairfax Court House, when they managed to sneak past federal guards to seize a “Union” General and 100 of his troops. Following the famous expeditions, he embarked on several missions, receiving promotions to captain, major, and finally colonel in December 1864 for his successes.

After the wars, he became an attorney for US President Ulysses Grant. Additionally, he held the position of the American consul in Hong Kong.

He died at age 82, after battling complications from previous throat surgery. 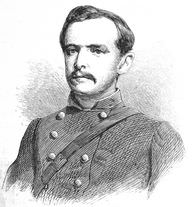 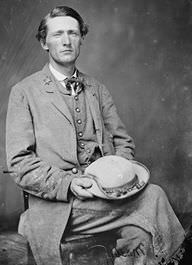 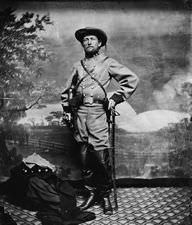 Title
This original picture was presented March 1971 by Mrs. Joel Griffing of Berryville, VA, to the Holy Cross Abbey Museum in Berryville,VA. This is a digital photograph I took of that picture.
Author
Original uploader was Sevenofnine7o9 at en.wikipedia
Source
http://commons.wikimedia.org/wiki/File:Old_mosby_and_russell.jpg
License
Public domain

How old was John Singleton Mosby when he died?

John Singleton Mosby would be 188 years old if he was alive today.

Where was John Singleton Mosby from?

He was born in Powhatan County, Virginia, U.S..