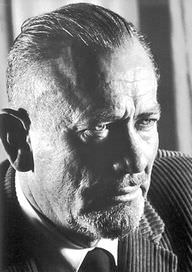 John Steinbeck was an American author best known for his comic novels such as Tortilla Flat and Cannery Row. His other famous books include East of Eden, The Red Pony and The Grapes of Wrath. Throughout his career, he authored a total of twenty-seven books ranging from novels to collections of short stories.

He won the National Book Award in 1939 as well as the 1940 Pulitzer Prize for Fiction with his book The Grapes of Wrath. He went on to win the 1962 Nobel Prize in Literature. He was awarded the Presidential Medal of Freedom by President Lyndon B. Johnson in 1964.

He was married three times. His last marriage was to Elaine Scott. The marriage lasted from 1950 until his death in 1968. He had two children: John Steinbeck IV and Thomas Steinbeck.

Title
John Steinbeck and son John visit LBJ at the oval office in the White House. To the left is 19 year-old John Steinbeck, IV with his father, John Steinbeck, III. The senior Steinbeck, a friend and sometime speech-writer for LBJ (they had first met in 1963), has written the president to ask on his son's behalf that he would be posted in Vietnam. The 4-minute meeting takes place on Monday, May 16, 1966, shortly after the younger John has finished bootcamp, and a few weeks before his departure for Vietnam. The visit is to say thank you in person, and to give the younger John the chance to shake the president's hand.
Author
White House photographer
Source
http://commons.wikimedia.org/wiki/File:JohnSteinbeck.JPG
License
Public domain

A journey is like marriage. The certain way to be wrong is to think you control it.John Steinbeck

A sad soul can kill quicker than a germ.John Steinbeck

I have come to believe that a great teacher is a great artist and that there are as few as there are any other great artists. Teaching might even be the greatest of the arts since the medium is the human mind and spirit.John Steinbeck

It has always been my private conviction that any man who puts his intelligence up against a fish and loses had it coming.John Steinbeck

It has always seemed strange to me... the things we admire in men, kindness and generosity, openness, honesty, understanding and feeling, are the concomitants of failure in our system. And those traits we detest, sharpness, greed, acquisitiveness, meanness, egotism and self-interest, are the traits of success. And while men admire the quality of the first they love the produce of the second.John Steinbeck

It is a common experience that a problem difficult at night is resolved in the morning after the committee of sleep has worked on it.John Steinbeck

It seems to me that if you or I must choose between two courses of thought or action, we should remember our dying and try so to live that our death brings no pleasure on the world.John Steinbeck

Man, unlike anything organic or inorganic in the universe, grows beyond his work, walks up the stairs of his concepts, emerges ahead of his accomplishments.John Steinbeck

Many a trip continues long after movement in time and space have ceased.John Steinbeck

Men do change, and change comes like a little wind that ruffles the curtains at dawn, and it comes like the stealthy perfume of wildflowers hidden in the grass.John Steinbeck

No man really knows about other human beings. The best he can do is to suppose that they are like himself.John Steinbeck

Power does not corrupt. Fear corrupts... perhaps the fear of a loss of power.John Steinbeck

Sectional football games have the glory and the despair of war, and when a Texas team takes the field against a foreign state, it is an army with banners.John Steinbeck

Unless a reviewer has the courage to give you unqualified praise, I say ignore the bastard.John Steinbeck

Where does discontent start? You are warm enough, but you shiver. You are fed, yet hunger gnaws you. You have been loved, but your yearning wanders in new fields. And to prod all these there's time, the Bastard Time.John Steinbeck

John's birthday is in 212 days

John Steinbeck would be 119 years old if he was alive today.

He was born in Salinas Valley, California, U.S..

People born on February 27 fall under the Zodiac sign of Pisces, the Fish. John Steinbeck is the 250th most popular Pisces.

In general, John Steinbeck ranks as the 3200th most popular famous person, and the 38th most popular author / writer / novelist / playwright of all time. “The Famous Birthdays” catalogs over 40,000 famous people, everyone, from actors to actresses to singers to tiktok stars, from serial killers to chefs to scientists to youtubers and more. If you're curious to see who was born on your birthday, you can use our database to find out who, what, where, when and why. You can search by birthday, birthplace, claim to fame or any other information by typing in the search box, or simply browse our site by selecting the month, the day, the horoscope, or any other clickable option.