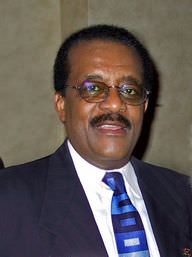 Johnnie Cochran was a noted American lawyer best remembered for being a leading member of the "Dream Team", the legal team that successfully defended renowned football player O.J. Simpson in 1995 after he was accused of murdering his ex-wife Nicole Brown Simpson and Ronald Goldman. Besides the O. J. Simpson murder case, he is also remembered for representing other famous celebrities such as Michael Jackson, Sean Combs, and Tupac Shakur. In addition to defending celebrities, he also made a name for himself litigating high-popular cases of police brutality.

He was married twice. His first marriage was to Barbara Cochran from 1960 to 1977. In 1985, he got married to his second wife Sylvia Dale. The Marriage lasted until his death in 2005. He fathered three children.

In 2004, he was diagnosed with brain tumor. The disease eventually claimed his life in 2005.

Johnnie's birthday is in 307 days

How old was Johnnie when he died?

Johnnie Cochran would be 85 years old if he was alive today.

Where was Johnnie from?

He was born in Shreveport, Louisiana, U.S..