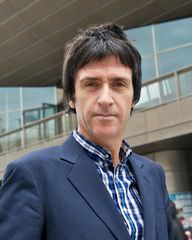 He started gaining popularity as a co-songwriter and guitarist of the rock band known as “The Smiths” during the 80’s. Since then, he has been a member of several bands such as The Pretenders, Modest Mouse and Electronic. In 2013, he released his debut solo album titled “The Messenger”. In the following year he released his second album entitled “Playland”.

He was born to Frances Patricia Doyle and John Joseph Maher. He and his spouse Angie have been married since 1979. The couple has been blessed with two children named Nile Marr and Sonny.

He won the Pioneer Award at the 2019 AIM Awards.

He published his autobiography under the title “Set the Boy Free” in 2016.

Johnny's birthday is in 32 days

Where is Johnny from?

He was born in Ardwick, Manchester, England, UK.