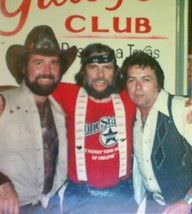 Johnny Paycheck was a legendary musician, famous for the country music genre. Paycheck, who was also a songwriter and multi-instrumentalist rose to prominence in the 1970s and became one of the biggest influences in country music's "outlaw movement". He is most-renowned for his signature song "Take This Job and Shove It." He had a tremendous five-decade music career, with a long list of successful and top-charting records including "The Lovin' Machine," "Wherever You Are," and "Double Trouble."

He was an alcohol and drug addict.

He spent two years in prison for assault during the 1950s.

He died from complications of emphysema and asthma.

Johnny's birthday is in 241 days

Johnny Paycheck would be 84 years old if he was alive today.

He was born in Greenfield, Ohio, U.S..