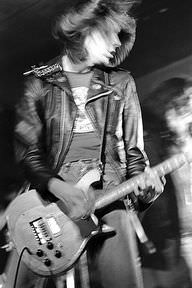 Johnny Ramone was the stage name of the American guitarist, songwriter, musician, actor and author John William Cummings. He was known best for his career as the guitarist for the Ramones, a punk rock band which he co-founded in 1974 and performed with until the end of the band in 1996. He appeared in the films “Rock ‘n’ Roll High School” as himself and “Stranded” as Lowell. In 2012, his autobiography, “Commando” was published by his widow.

He grew up in Forest Hills, Queens as the only child of his pipefitter father. He was married to Linda Daniele, who previously dated his bandmate, Joey Ramone. This fostered animosity between the two.

He has been a Rock and Roll Hall of Famer alongside other members of the Ramones since 2002.

Johnny's birthday is in 247 days

Johnny Ramone would be 74 years old if he was alive today.

He was born in Long Island, New York U.S..