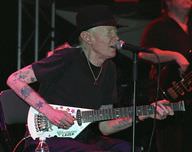 Known for his blues-rock songs, John Dawson "Johnny" Winter III rose to fame due to his blue rock albums in the 1960s and 1970s. His association with top arts such as Edgar Winter, Tommy Shannon, RickDerringer and Muddy Waters further catapulted him to stardom. Some of his studio and live albums are:

He was the producer for Grammy Award winner, Muddy Waters.

He died In July 2014 as a result of emphysema and pneumonia.

As a guitarist, he mostly played the Gibson Firebirds.

Johnny's birthday is in 147 days

Johnny Winter would be 78 years old if he was alive today.

He was born in Beaumont, Texas, U.S..