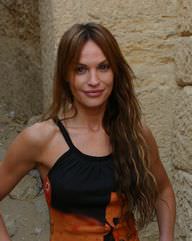 Jolene is an American actress, model who is popularly recognized for her feature in the science-fiction series, "Star Trek: Enterprise" where she played the science officer, "T'pol" of the "Vulcan" species.

Growing up, Jolene was a lonely child as she found it difficult mingling with other kids. She decided to spend most of her time surfing and improving herself in artistic skills.

When she was seventeen, she left home for Asia and Europe to partake in modeling. She appeared on "Sinners and Saints" (2010), where she played a supporting role.

She is noted to have three siblings. She got married to CEO of Live Nation, Michael Rapino in April of 2003. Their children include; Rivers Rapino, Ryder James Rapino

She won the "Best Supporting Actress in a Television Series" at the Saturn Awards in 2002.

She was nominated for the "Best Supporting Actress in a Television Series" at the 2003 and 2004 Saturn Awards.

She won the 2002 "Cinescape Genre Face of the Future Award".

She is a dog lover.

She has appeared on K9 Magazine.

Jolene has appeared on Maxim's "Girls of Maxim" gallery.

I like men who are very cool but who are also so brilliant that they are almost insane. Sean Penn, Gary Oldman, Bob Dylan, Tom Waits - men who would be flipping burgers if they hadn't found an outlet for their brilliant mind-sets.Jolene Blalock

Surfing is such an amazing concept. You're taking on Nature with a little stick and saying, 'I'm gonna ride you!' And a lot of times Nature says, 'No you're not!' and crashes you to the bottom.Jolene Blalock

Jolene's birthday is in 88 days

Where is Jolene from?

She was born in San Diego, California, U.S..

People born on March 5 fall under the Zodiac sign of Pisces, the Fish. Jolene Blalock is the 3021st most popular Pisces.

Aside from information specific to Jolene Blalock's birthday, Jolene Blalock is the 19091st most famous American and ranks 134th in famous people born in San Diego, California, U.S.

In general, Jolene Blalock ranks as the 37369th most popular famous person, and the 3784th most popular actress of all time. “The Famous Birthdays” catalogs over 40,000 famous people, everyone, from actors to actresses to singers to tiktok stars, from serial killers to chefs to scientists to youtubers and more. If you're curious to see who was born on your birthday, you can use our database to find out who, what, where, when and why. You can search by birthday, birthplace, claim to fame or any other information by typing in the search box, or simply browse our site by selecting the month, the day, the horoscope, or any other clickable option.