He is an Argentine sportsman who played football professionally in the capacity of a midfielder.

Jonás Manuel Gutiérrez was the name given to him at birth. During his time as a footballer, he was diagnosed with testicular cancer and had to undergo chemotherapy and other treatments. Eventually, his left testicle was removed. He later filed a lawsuit against Newcastle for discriminating against him due to his diagnosis and won the case.

In 2001, he started playing for Vélez Sársfield and was part of the team till 2005 when he decided to sign with Mallorca. In 2008, he decided to go back on the contract and ended up being charged compensation. In that same year, he joined Newcastle United and was an impressive addition for them.

Title
Jonás Gutiérrez being presented with the March 2010 Championship Player of the Month by a Newcastle United fan at St James' Park.
Author
knokka from alnwick
Source
http://commons.wikimedia.org/wiki/File:JonasGutierrezpotm.jpg
License
CC BY 2.0 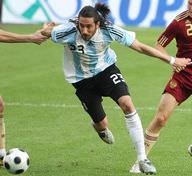 Jonás's birthday is in 272 days

Where is Jonás from?

He was born in Sáenz Peña, Argentina.

What is Jonás Gutiérrez's height?