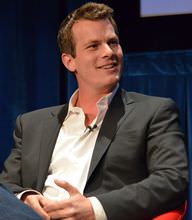 Jonathan Nolan shot into the limelight after his yet-to-be published story titled "Memento Mori" was adapted into a movie by his brother, Christopher Nolan. The film, “Memento”, later earned them an Academy Award nomination.

Since then, he’s gone on to work on many television series and films. He’s best known as the originator of CBS’ “Person of Interest”. He has partnered with his brother to write a number of movies including “The Dark Knight Rises”, “Interstellar” and “The Dark Knight”.

He was born to Brendan and Christina Nolan. He has another brother aside from Christopher. In 2009, he married American screenwriter Lisa Joy.

He studied English at Georgetown University.

Other prominent filmmakers that he has worked with include Bryan Burk and J. J. Abrams.

Jonathan's birthday is in 250 days

Where is Jonathan from?