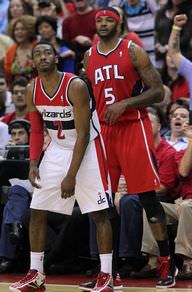 Joshua Smith chose to go back on his commitment to play basketball for Indiana University in favor of declaring for the NBA draft of 2004. He was selected by the Atlanta Hawks, through which he made his debut in the league and for which he played until 2013.

He also had one-year stints in the league with the Detroit Pistons, Los Angeles Clippers and Houston Rockets before his move to China to play for the Sichuan Blue Whales of the Chinese Basketball Association for a year (2016-2017). His final appearance in the NBA was with the New Orleans Pelicans in 2017.

He is the son of Paulette and Pete Smith, also a retired professional basketball player. He has three children with Alexandria Lopez, whom he wed in 2010.

He joined the Big3 basketball league in 2019.

Josh's birthday is in 60 days

He was born in College Park, Georgia, U.S..

What is Josh Smith's height?