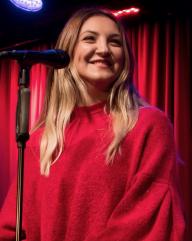 Julia Michaels is the professional name of Julia Carin Cavazos – an American singer and songwriter. She started her work in the music industry as a songwriter who had the opportunity to write for the likes of Justin Bieber, Selena Gomez, Fifth Harmony, Demi Lovato and Gwen Stefani.

In 2017, her own single, Issues, was released which she followed up with her EP, Nervous System, in the same year.

She is the daughter of a Mexican-Puerto Rican actor known as Juan Manuel Cavazos. Her elder sister is Jaden Michaels, also a professional songwriter and singer.

In October 2018, she started dating American singer and songwriter, Lauv, shortly after they collaborated on the song, There’s No Way. Their relationship ended a few months later.

She began to date JP Saxe, a Canadian musician, in early 2020. They had previously worked together on the song If the World Was Ending.

In 2018, she won a BMI Pop Award for the category of “Award-Winning Song” for her single, Issues. The same single earned her a Grammy Award nomination for “Song of the Year”.

Julia's birthday is in 131 days

Where is Julia from?

She was born in Iowa, United States.