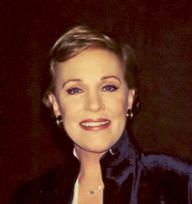 Julie Andrews is an English actress and singer.

She is regarded as one of the greatest musical actresses of all time and a legend. She received a Star on the Hollywood Walk of Fame in 1979.

She has been married twice and she has 5 children.

She declined her 3rd Tony nomination for "Victor/Victoria", because she felt the entire production was snubbed!

Julie's birthday is in 300 days

She was born in Walton-on-Thames, Surrey, England, UK.