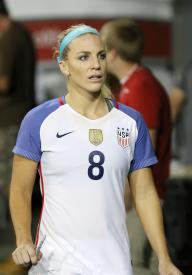 Julie is an American sports celeb who specializes in soccer. As at 2019, she was playing for Chicago Red Stars.

Her first appearance in the National Team was in 2013.  She played for Santa Clara University Broncos for three years between 2010 and 2013.

Julie Beth Ertz is the daughter of David Johnston and Kristi Johnston. She has a sibling by name Melanie Johnston. She got married to Zach Ertz in 2017.

She and her husband do a lot of charity work under the name Ertz Family Foundation.

Julie's birthday is in 182 days

She was born in Phoenix, Arizona, U.S..

What is Julie Ertz's height?