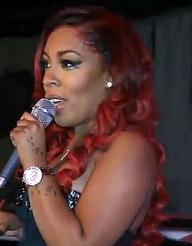 Michelle has also found success as a recording artist with her critically acclaimed studio albums, “Rebellious Soul”, “Anybody Wanna Buy a Heart?” and “Kimberly: The People I Used to Know”.

She gave birth to her son in September 2004 with a man named Brian Bowman.

She is known to have dated British actor, Idris Elba, in 2013. She started dating Kastan Sims in 2016 and their relationship was still going strong as of early 2020.

She was mentored by singer, R Kelly, while she was signed to the now-defunct Jive Records.

K. Michelle's birthday is in 198 days

Where is K. Michelle from?

She was born in Memphis, Tennessee, U.S..