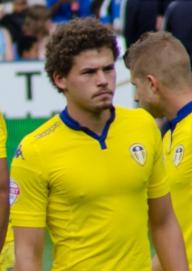 He is a professional footballer of English origins who has played for some great teams as a midfielder.

Born Kalvin Mark Phillips, this English star enrolled at Farnley Academy. At a young age, he expressed interest in football and aspired to get into the field.

He joined Wortley, a local club in 2003 and made such a good impression there that he stayed with them for about seven years. At fourteen years old, he got the opportunity to play for Leeds United and sailed through their youth ranks with finesse. Because his game was impressive, the club signed a professional deal with him in 2014. Around the time that his contract ended, a new coach by name Garry Monk was appointed and knowing how good Phillips is, he offered him a new contract requesting that he stays with the team for another three years. He was later offered a chance to play in a few national teams due to his background. He had the choice to play for Ireland, Jamaica or England but he chose to play for England.

Kalvin's birthday is in 64 days

Where is Kalvin from?

He was born in Leeds, England, UK.