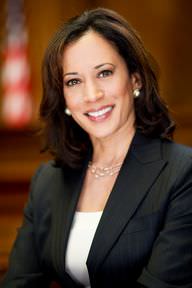 Kamala Harris is an American attorney and politician who, on January 20, 2021, began serving as the 49th vice president of her nation, under the Joe Biden administration.

Her inauguration into office makes her the first female Vice President in the history of the United States. Harris is also the first woman of color, with Asian descent to serve in that position.

In January 2017, she succeeded Barbara Boxer as California’s Senator – this came after her victory over Loretta Sanchez in the previous year’s Senate elections.

Between 2004 and 2011, Harris served as the district attorney for San Francisco.

She is of Jamaican and Indian descent. Her father is identified as Donald Harris. Her mother, who is of Indian descent, is named Shyamala Gopalan Harris. She grew up besides her younger sister, who is known as Maya.

She became married to California attorney Douglas Emhoff in the year 2014.

In 1981 Harris graduated from Westmount High School. She received her college education at Howard University. And continued her education at University of California, Hastings College of the Law, where she obtained a degree in law.

During her campaign for Attorney General, Harris received support from other top-notch politicians such as Nancy Pelosi and Dianne Feinstein.

On August 11, 2020, Harris was named as the running mate for the presidential candidate of the Democratic Party, Joe Biden, ahead of the 2020 U.S. Presidential election.

After being selected as the vice-presidential candidate for the Democrats, she became the first Black-American woman and also, the first Indian-American to be appointed in that role for a major American political party.

She received praise and support from former U.S. president Barack Obama – he described her as the ideal partner for Biden, who served as his vice during his tenure in office.

On the other hand, Donald Trump did not seem to be impressed by Biden’s choice of a running mate, whom he described as “the meanest” and “most horrible” U.S. senator.

I believe that a child going without an education is a crime.Kamala Harris

I want to use my position of leadership to help move along at a faster pace what I believe and know the Obama administration wants to do around the urgency of climate change.Kamala Harris

Kamala's birthday is in 27 days

Where is Kamala from?

She was born in Oakland, California, U.S..

People born on October 20 fall under the Zodiac sign of Libra, the Scales. Kamala Harris is the 112th most popular Libra.

Aside from information specific to Kamala Harris' birthday, Kamala Harris is the 916th most famous American and ranks 3rd in famous people born in Oakland, California, U.S.

In general, Kamala Harris ranks as the 1332nd most popular famous person, and the 7th most popular politician of all time. “The Famous Birthdays” catalogs over 40,000 famous people, everyone, from actors to actresses to singers to tiktok stars, from serial killers to chefs to scientists to youtubers and more. If you're curious to see who was born on your birthday, you can use our database to find out who, what, where, when and why. You can search by birthday, birthplace, claim to fame or any other information by typing in the search box, or simply browse our site by selecting the month, the day, the horoscope, or any other clickable option.