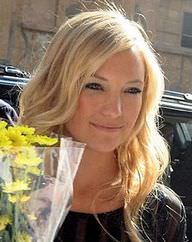 Kate Hudson is an American actress, entrepreneur, and model. She owns the athletic apparel company Fabletics. She is best known for starring in “How To Lose A Guy In 10 Days”.

Kate is a practicing Buddhist. In 2000, Kate was nominated for an Academy Award for Best Supporting Actress. Kate is known for starring in romantic comedies like her mother Goldie Hawn.

She has starred in 2 romantic comedies with Matthew McConaughey, “How To Lose A Guy in 10 Days” and “Fool’s Gold”.

Kate is the daughter of Goldie Hawn and Bill Hudson. Her stepfather is actor Kurt Russell.

Kate has a son with ex Matt Bellamy and another son with ex Chris Robinson. She has been linked to several high profile celebrities including baseball player A-Rod, Lance Armstrong, and Nick Jonas.

Title
Kate Hudson after her appearance on the Late Show with David Letterman promoting You Me and Dupree
Author
Katie Kiehn
Source
http://commons.wikimedia.org/wiki/File:Kate_Hudson3_2006.jpg
License
CC BY-SA 2.0

Kate's birthday is in 77 days