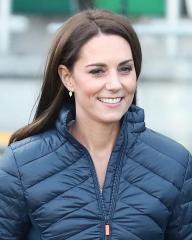 Catherine “Kate” Middleton is the Duchess of Cambridge. This is the title she inherited when she married Prince William, Duke of Cambridge in 2011. In the likely event that Prince William one day becomes King of England, Kate Middleton will also be the Queen Consort of the United Kingdom.

Kate Middleton’s first official engagement as a royal came when she and her husband met with US President Barack Obama shortly after their marriage. What Kate is most known for is her charity work, specifically in the areas of art, addiction and children. For instance, she is Patron of Action on Addiction, the Natural History Museum, the Royal Air Force Cadet and Action for Children, just to name a few. She is also very active in the medical field, including being Patron of the Royal College of Obstetricians and Gynecologists and a noted advocate of improving services to deal with mental health issues, with her family having a long history of producing volunteer nurses.

Since getting married in 2011, Kate Middleton and Prince William have had three children together. In 2013 Kate gave birth to their first child, Prince George in Cambridge. Then Princess Charlotte was born in 2015, followed by Prince Louis in 2018.

In 2010, Kate got engaged to Prince William during their tour of the Lewa Wildlife Conservancy in the African nation of Kenya.

Kate's father worked as a pilot. Her mother, on the other hand, worked as an airline stewardess.

In the 1980s, Kate spent a number of years living in Amman, Jordan with her family.

Kate met Prince William for the first time in 2001 while they were both students at the University of St. Andrews.

She is older than her husband, Prince William by about six months.

Upon her marriage to Prince William in 2011, Kate became the oldest royal bride in the entire history of the British monarchy. She was 29 years old then.

Well I think if you really go out with someone for quite a long time you do get to know each other very, very well, you go through the good times, you go through the bad times. You know both personally, but also within a relationship as well.Kate Middleton

Yes, well I really hope I can make a difference, even in the smallest way. I am looking forward to helping as much as I can.Kate Middleton

British socialite and a party planner

Kate's birthday is in 114 days

She was born in Reading, Berkshire, England, UK.

People born on January 9 fall under the Zodiac sign of Capricorn, the Sea Goat. Kate Middleton is the 150th most popular Capricorn.

In general, Kate Middleton ranks as the 1672nd most popular famous person of all time. “The Famous Birthdays” catalogs over 40,000 famous people, everyone, from actors to actresses to singers to tiktok stars, from serial killers to chefs to scientists to youtubers and more. If you're curious to see who was born on your birthday, you can use our database to find out who, what, where, when and why. You can search by birthday, birthplace, claim to fame or any other information by typing in the search box, or simply browse our site by selecting the month, the day, the horoscope, or any other clickable option.