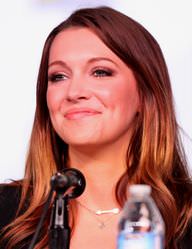 Katie Cassidy is an American actress. She is best known for her role in the TV series "Arrow".

She has earned the nickname "Scream queen" because of her many roles in modern horror films.

She has been nominated for 2 Teen Choice Awards.

She was born in Los Angeles in 1986. Her family members are all actors and actresses. She is dating Oscar and Emmy nominated producer Dana Brunetti.

Greg Berlanti, David Nutter, Andrew Kreisberg and Marc Guggenheim are the people I wanted to work with. They're smart, they're funny, they're cool, they're edgy.Katie Cassidy

I love heels... whoever created heels is amazing!Katie Cassidy

Katie's birthday is in 143 days

Where is Katie from?