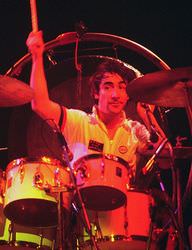 Keith Moon was an English drummer. He is best known as the drummer of the band The Who. He released 11 studio albums with The Who and a solo album.

He is regarded as one of the best drummers of all time. Rolling Stone magazine's readers voted him as the 2nd greatest drummer in music history. He was Neil Peart and Dave Grohl's major influence.

He dated Kim Kerrigan and Annette Walter-Lax. One of his best friends was Ringo Starr. He was addicted to alcohol. He died at the age of 32, in 1978, of Heminevrin overdose. It was his drug, in order to treat symptoms of alcohol withdrawal.

English musician and the drummer of The Beatles

Keith Moon's birthday is in 328 days

How old was Keith Moon when he died?

Keith Moon would be 76 years old if he was alive today.

Where was Keith Moon from?

He was born in Harlesden, London, England, UK.