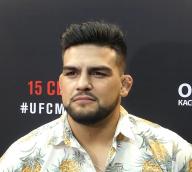 Gastelum is an American mixed martial artist, who is mostly acknowledged for his time under Ultimate Fighting Championship (UFC), where he has competed in the Welterweight and Middleweight divisions.

Over the course of his remarkable career, he has faced tough opponents like Brian Melancon, Rick Story, Jack Hermansson, Ian Heinisch, and several others.

His father is Patricia Encinas. He has been in a romantic relationship with a lady named Macey Osomo.

He was awarded the "Breakthrough Fighter of the Year" by World MMA Awards in 2014.

Gastelum stands at a height of 175 cm.

He studied at Cibola High School, and the North Idaho College.

Kelvin's birthday is in 272 days

Where is Kelvin from?

What is Kelvin Gastelum's height?

People born on October 24 fall under the Zodiac sign of Scorpio, the Scorpion. Kelvin Gastelum is the 3013th most popular Scorpio.

Aside from information specific to Kelvin Gastelum's birthday, Kelvin Gastelum is the 19250th most famous American and ranks 572nd in famous people born in California, U.S.

In general, Kelvin Gastelum ranks as the 37480th most popular famous person, and the 105th most popular mma fighter of all time. “The Famous Birthdays” catalogs over 40,000 famous people, everyone, from actors to actresses to singers to tiktok stars, from serial killers to chefs to scientists to youtubers and more. If you're curious to see who was born on your birthday, you can use our database to find out who, what, where, when and why. You can search by birthday, birthplace, claim to fame or any other information by typing in the search box, or simply browse our site by selecting the month, the day, the horoscope, or any other clickable option.