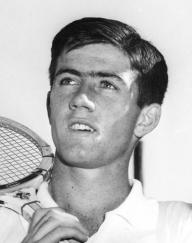 Former professional tennis player Ken Rosewall set a record of being the oldest major tournament winner in the Open Era at 37. The Australian tennis player was a major competitor for 25 years [1952 – 1977].

Born in Southern Sydney, Australia, where his father owned three clay tennis courts, this tennis star took up the racket at age three. Rosewall played in his first tournament at age 9 and won the under-fourteen Metropolitan Hardcourt Championships at age 11.

Ken Rosewall started out in the 1951 amateur tour and participated for 5 consecutive years before his career in professional tennis circles kicked off.

Though his qualification for professional tennis closed down Ken’s access to major tournaments, he soon had the opportunity to shine again when Open tennis debuted in 1968.

He won 18 majors; including; eight singles, nine doubles, one mixed, which was sixth-highest male totals at his retirement. He has also won 15 professional tournament titles and a total of 133 tournaments in his 25-year career.

The sportsman was inducted into the Sport Australia Hall of Fame in 1975. He was pronounced second world’s best tennis player in the same year.

Ken's birthday is in 79 days

Where is Ken from?

He was born in Sydney, Australia.

What is Ken Rosewall's height?