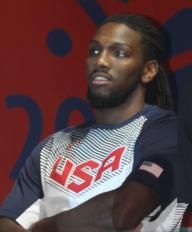 Kenneth Faried is a highly-recognized American basketball player who mostly plays as a power forward. He became a household name in 2011 after joining the Denver Nuggets. He has also played for some top basketball teams such as Brooklyn Nets, Houston Rockets, and Zhejiang Lions.

He also played for the Morehead State University team during his time at the school.

Faried played for the senior national team of his country on several occasions. He was part of the team that won the FIBA Basketball World Cup in 2014. His name was also included in the top 30 players for the 2016 Olympic Games.

He was born to Waudda Faried and Kenneth Lewis. In 2010, he announced the arrival of his first daughter named Kyra.

Kenneth's birthday is in 288 days

Where is Kenneth from?

What is Kenneth Faried's height?