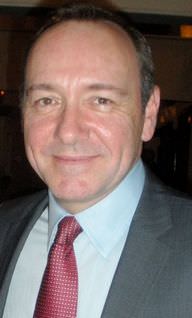 Kevin Spacey is an American actor and director.

He is regarded as one of the best character actors of all time in Hollywood.

He has been nominated for a Grammy Award and 4 Primetime Emmy Awards. He has won 2 Academy Awards and 1 Golden Globe.

Many believe that he is gay. He has stated about this: "I've just never believed in pimping my personal life out for publicity. I'm not interested in doing it. Never will do it. They can gossip all they want; they can speculate all they want".

I find it sad that by not talking about who I sleep with, that makes me mysterious. There was a time when I would have been called a gentleman.Kevin Spacey

I went through a period of great rebellion within my family, when I was about 9 or 10. I was mad, I had no focus, had no real interest in anything, and so I started to do things that were just rebellious and stupid.Kevin Spacey

Over the years, I've been trying to build a relationship with an audience. I've tried to maintain as much of a low profile as I could so that those characters would emerge and their relationship with audiences would be protected.Kevin Spacey

Success is like death. The more successful you become, the higher the houses in the hills get and the higer the fences get.Kevin Spacey

Kevin's birthday is in 21 days

He was born in South Orange, New Jersey, U.S..