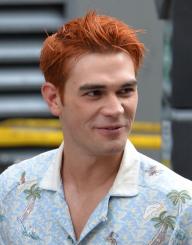 He landed the role of Kane Jenkins on New Zealand soap opera, Shortland Street from 2013 to 2015.

He was selected after a four-mont- long global talent search to play Archie Andrews in 2016 drama series, Riverdale.

He portrayed Ethan Montgomery in comedy-drama 2017 film, A Dog’s Purpose.

James replaced Kian Lawley in 2018’s The Hate U Give.

He also starred as Griffin in 2019 Netflix film, The Last Summer.

His father is a Samoan and his mom is an European-New Zealander. He grew up with his two older sisters, Timena and Arieta. His uncle is a former rugby player and coach, Michael Jones.

He was awarded “Breakthrough Performance” at the Saturn Award in 2017.

He has identified himself as Christian.

In 2017, he was involved in an accident after dozing off behind the wheels after shooting late into the night.

At the age of 14, he recorded his first solo guitar album.

Where is KJ Apa from?

He was born in Auckland, New Zealand.