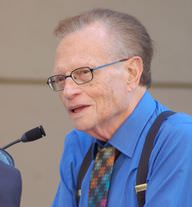 Larry King was an award-wining American broadcaster and author who had vast experience as a TV and radio host.

His career began in the 1950s. However, he gained global popularity when he began hosting “The Larry King Show”, in 1978. In June of 1985, he started hosting the “Larry King Live” TV show on CNN.

On his shows, he interviewed a broad range of personalities including several U.S. presidents and Russian politician, Vladimir Putin. He also interviewed the late music legend, Frank Zappa.

His dad, Aaron Zeiger, was a restaurant owner while his mum, Jennie worked in the garment industry. He grew up with his brother.

King was married several times. His first wife, Freda Miller, was his high school sweetheart – he got married to her in 1952, at the time he was only 19 years old. Their marriage ended in 1953. He married Annette Kaye in 1961, with whom he had his first child, Larry Jr., with.

In addition to Larry Jr., King had four other children namely, Chaia, Chance, Andy, and Cannon.

King’s outstanding talent and contribution as a broadcaster earned him many awards including multiple CableACE awards for categories such as “Best Talk Show Series” and “Best Interviewer”.

He was inducted into several Halls of Fame. Some of them include the “National Radio Hall of Fame” and “Broadcasters' Hall of Fame”.

In November 2019, he revealed that he spent several weeks in coma, which was due to him suffering from stroke in March, that year.

American businessman and founder of CNN

Larry's birthday is in 353 days

How old was Larry when he died?

Larry King would be 89 years old if he was alive today.

Where was Larry from?