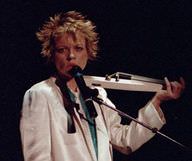 Anderson is a renowned musician, composer and avant-garde artist whose work cut across multiple genres. During the start of her career, she mainly focused on technology, visuals and language imagery, which was widely accepted during her time. She however gained much prominence in 1981 with the release of her song, "O Superman" - which reached the 2nd and 9th positions on the UK Singles Chart and the Dutch Top 40 respectively. She has worked with countless top music figures including Janice Pendarvis, Peter Gabriel, Adrian Belew, and Lou Reed.

Her parents are Arthur Anderson and Mary Rowland. She married American musician, Lou Reed in 2008 and they remained married till his death in 2013.

At the Grammy Awards, her work, "Anderson, Laurie: Landfall" won her the "Best Chamber Music/Small Ensemble Performance" in 2019. She earned a nomination for the "Best Instrumental Arrangement Accompanying" for her work titled "Gravity's Angel" in 1985.

In 2021, her album "Songs From The Bardo" was nominated for the "Best New Age Album".

A lot of the work in United States is highly critical of technology. I'm using 15,000 watts of power and 18 different pieces of electronic equipment to say that.Laurie Anderson

At the School of Visual Arts in New York, you can get your degree in Net art, which is really a fantastic way of thinking of theater in new ways.Laurie Anderson

I've never really had a hobby, unless you count art, which the IRS once told me I had to declare as a hobby since I hadn't made money with it.Laurie Anderson

Laurie's birthday is in 188 days

Where is Laurie from?

She was born in Glen Ellyn, Illinois, U.S..

People born on June 5 fall under the Zodiac sign of Gemini, the Twins. Laurie Anderson is the 2061st most popular Gemini.

In general, Laurie Anderson ranks as the 23496th most popular famous person, and the 2479th most popular singer of all time. “The Famous Birthdays” catalogs over 40,000 famous people, everyone, from actors to actresses to singers to tiktok stars, from serial killers to chefs to scientists to youtubers and more. If you're curious to see who was born on your birthday, you can use our database to find out who, what, where, when and why. You can search by birthday, birthplace, claim to fame or any other information by typing in the search box, or simply browse our site by selecting the month, the day, the horoscope, or any other clickable option.