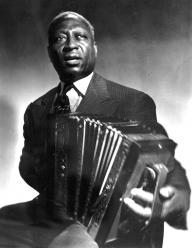 American folk and blues singer, songwriter and guitarist, Huddie Ledbetter is known professionally as Lead Belly. His versatility in music cuts across several genres and topics including; prison life, liquor, racism and women.

He was known for playing the twelve-string guitar and boasted of over hundred songs. He is also noted to have written songs about several top figures such as Franklin D. Roosevelt, Howard Hughes, Adolf Hitler, Jack Johnson and several others.

His popular works include “Black Betty", “Goodnight, Irene” and “In the Pines”.

His father was Wesley Ledbetter, while his mother was Sallie Brown. He had two siblings. He was married to Martha Promise between 1935 and 1949.

He was nominated for the "Best Folk Recording" at the 1966 Grammy Awards.

He played the piano, windjammer, mandolin, violin and harmonica.

A biographical film, about him, was released in 1967, which starred retired actor, Roger E. Mosley in the role of Lead Belly.

He served time in prison.

Lead Belly was a famous American singer, songwriter and guitarist, who was born on January 20, 1888. As a person born on this date, Lead Belly is listed in our database as the 60th most popular celebrity for the day (January 20) and the 29th most popular for the year (1888).

People born on January 20 fall under the Zodiac sign of Aquarius, the Water Bearer. Lead Belly is the 1932nd most popular Aquarius.

Aside from information specific to Lead Belly's birthday, Lead Belly is the 14804th most famous American and ranks 1293rd in famous people born in U.S.

In general, Lead Belly ranks as the 27530th most popular famous person, and the 2809th most popular singer of all time. “The Famous Birthdays” catalogs over 25,000 famous people, everyone, from actors to actresses to singers to tiktok stars, from serial killers to chefs to scientists to youtubers and more. If you're curious to see who was born on your birthday, you can use our database to find out who, what, where, when and why. You can search by birthday, birthplace, claim to fame or any other information by typing in the search box, or simply browse our site by selecting the month, the day, the horoscope, or any other clickable option.