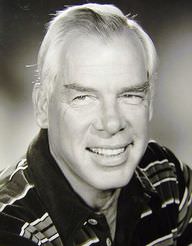 He was an American film and television actor who is noted for his premature white hair and distinctive voice. A popular TV role on his acting resume was the NBC's 1957 - 1969 crime series, "M Squad", where he starred as 'Detective Lieutenant Frank Ballinger'.

His father, Lamont Marvin, was an advertising executive and later became head of New York and New England's Apple Institute. His mum, Courtenay Washington, was a fashion and beauty writer/editor.

He won the "Action Performance" at the 1968 Golden Lauren.

He was given the "American Campaign Medal" and was bestowed the "Presidential Unit Citation".

He learnt how to play the violin when he was young.

He always spent his spare time hunting puma, wild turkey, deer and bobwhite, when he was a teenager.

He was expelled from several schools for bad behavior.

Marvin served in the U.S Marine during the World War II.

I only make movies to finance my fishing'.Lee Marvin

Lee Marvin was a famous American actor, who was born on February 19, 1924. As a person born on this date, Lee Marvin is listed in our database as the 83rd most popular celebrity for the day (February 19) and the 106th most popular for the year (1924).

People born on February 19 fall under the Zodiac sign of Pisces, the Fish. Lee Marvin is the 2571st most popular Pisces.

Aside from information specific to Lee Marvin's birthday, Lee Marvin is the 15008th most famous American and ranks 774th in famous people born in New York City, New York, U.S.

In general, Lee Marvin ranks as the 30203rd most popular famous person, and the 3714th most popular actor of all time. “The Famous Birthdays” catalogs over 25,000 famous people, everyone, from actors to actresses to singers to tiktok stars, from serial killers to chefs to scientists to youtubers and more. If you're curious to see who was born on your birthday, you can use our database to find out who, what, where, when and why. You can search by birthday, birthplace, claim to fame or any other information by typing in the search box, or simply browse our site by selecting the month, the day, the horoscope, or any other clickable option.