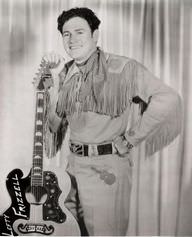 Lefty Frizzell is an American country singer and songwriter. He was known for his unique and intimate way of singing that has inspired many of his predecessors. Frizzell is widely regarded as one of the greatest country musicians of all time.

The singer was the first child out of his seven siblings. He grew up first in Texas and later in Arkansas. He was heavily influenced by country star Jimmie Rodgers and listened to his records as a young boy.

In 1950, Frizzell’s song “If You’ve Got the Money (I’ve Got the Time)” was a smash hit and catapulted him to fame, even touring with renowned artist Hank Williams. He released other hits, including “How Long Will it Take (To Stop Loving You)”, and “Forever (And Always).”

The Texas-born country singer found himself in a string of troubles during his career. He was arrested for having sex with an underage fan of his in 1947.

As he gained more fame and wealth, he was notoriously known for his poor spending habits. In the later years, he developed an alcohol problem and began to perform less.

He died in 1975 after suffering a stroke and was posthumously inducted into the Country Music Hall of Fame in 1982.

Lefty Frizzell's birthday is in 177 days

How old was Lefty Frizzell when he died?

Lefty Frizzell would be 94 years old if he was alive today.