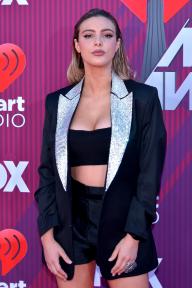 Eleanora Lele Pons Maronese, widely known as Lele Pons, is an American YouTuber, singer, actress, model, and dancer. She is massively followed for her comedy sketches and vlogs on YouTube, and music.

Her parents are Luis Pons and Anna Maronese.

Rising to fame on video app, Vine, she was the first to amass a billion loops and was able to garner over 8 billion before the app discontinued in 2016.

Her YouTube channel, which she named after herself also gathered over 15 million subscribers by December 2019.

Her first single, “Dicen” featured Matt Hunter and was released in 2018.

In 2016, she had the opportunity of meeting former First Lady, Michell Obama. Time Magazine included her in their list of The 30 Most Influential People on the Internet in 2016.

Lele has a beauty spot under her left eye.

She was bullied in high school for her peculiar accent and nose.

Lele Pons is a famous American Internet star, who was born on June 25, 1996. As a person born on this date, Lele Pons is listed in our database as the 3rd most popular celebrity for the day (June 25) and the 41st most popular for the year (1996).

People born on June 25 fall under the Zodiac sign of Cancer, the Crab. Lele Pons is the 48th most popular Cancer.

Aside from information specific to Lele Pons' birthday, Lele Pons is the 437th most famous American.

In general, Lele Pons ranks as the 643rd most popular famous person, and the 106th most popular youtube star of all time. “The Famous Birthdays” catalogs over 25,000 famous people, everyone, from actors to actresses to singers to tiktok stars, from serial killers to chefs to scientists to youtubers and more. If you're curious to see who was born on your birthday, you can use our database to find out who, what, where, when and why. You can search by birthday, birthplace, claim to fame or any other information by typing in the search box, or simply browse our site by selecting the month, the day, the horoscope, or any other clickable option.