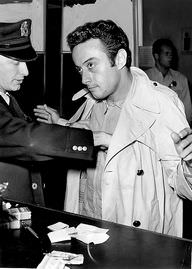 Title
Newspaper press photo of Lenny Bruce being arrested. The photo is 7.5" x 10.5", and borderless, with corner markings on the lower right indicating that it was not trimmed of any margins. The back of the photo has the newspaper printed photo and date. A search found no copyrighted photo of Lenny Bruce renewed during the required time frame. Press photos were rarely copyrighted in any case.
Author
Examiner Press photo
Source
http://commons.wikimedia.org/wiki/File:Lenny_Bruce_arrest.jpg
License
Public domain

Lenny Bruce was a controversial American stand-up comedian, screenwriter and satirist remembered for his instrumental role in the fight for freedom of speech as well as for his obscenity-laced performances, which repeatedly got him into trouble with the law. He is regarded as one of the greatest stand-up comedians of all time. He died tragically of an accidental drug overdose at that premature age of 40.

He was born to renowned stage performer Sally Marr and Myron Schneider. In 1951, he got married to a stripper named Honey Harlow, with whom he fathered a daughter named Kitty in 1955. The marriage ended in divorce in 1959.

Throughout his career, he was arrested multiple times for his obscene performances.

In 1966, his lifeless naked body was found lying on his bathroom floor after his drug overdose. According to the police, a syringe and narcotics paraphernalia were found near his nude body. His friend the iconic music producer Phil Spector purchased all the negatives of the photographs of his death scene in order to avoid them getting into the hands of the press.

His life was dramatized in the 1974 biographical film Lenny, in which he was portrayed by actor Dustin Hoffman.

Lenny's birthday is in 251 days

How old was Lenny when he died?

Lenny Bruce would be 97 years old if he was alive today.

Where was Lenny from?