Leonardo DiCaprio is an American actor and producer. He often collaborates with director Martin Scorsese.

He is regarded as one of the most versatile and talented actors of his generation.

He has been nominated for 5 Academy Awards, 3 Baftas, 10 Golden Globes (2 wins) and 8 Screen Actors Guild Awards.

He is of Russian, Italian and German descent. He speaks German fluently. He was named Leonardo, because his pregnant mother was looking at a Da Vinci painting, when he first kicked!

He has dated many famous models in the past, including Gisele Bündchen, Bar Refaeli and Erin Heatherton. He has also dated actress Blake Lively.

He is a devoted environmentalist. He bought his own island, on which he is planning to create an eco-friendly resort. 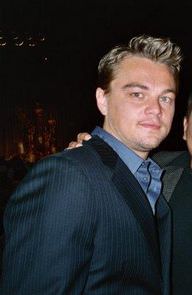 I didn't know what types of movies I wanted to do. I want to do things that are different. I want to take my time with each role.Leonardo DiCaprio

I get a friend to travel with me... I need somebody to bring me back to who I am. It's hard to be alone.Leonardo DiCaprio

I got attention by being funny at school, pretending to be retarded, and jumping around with a deformed hand.Leonardo DiCaprio

I grew up when I was 15 when I had my first opportunity in movies. I watched every great movie for a year and a half, and since then I've asked myself how I can emulate such artistry. That's really my motivation. I want to do something as good as my heroes have done.Leonardo DiCaprio

I have learned from my experiences in this industry that there is absolutely no way to control people's opinions on your performance in your movie. You go out there, promote your film and hope people like the work you did.Leonardo DiCaprio

I just want to keep doing what I'm doing and hopefully people will watch my movies.Leonardo DiCaprio

I prefer ordinary girls - you know, college students, waitresses, that sort of thing. Most of the girls I go out with are just good friends. Just because I go out to the cinema with a girl, it doesn't mean we are dating.Leonardo DiCaprio

I realise that I do not change the course of history. I am an actor, I do a movie, that's the end of it. You have to realise we are just clowns for hire. After I had success it was great, at first, not to worry about money. It was on my mind when I was growing up.Leonardo DiCaprio

I'm not the kind of person who tries to be cool or trendy, I'm definitely an individual.Leonardo DiCaprio

I've managed to keep a clear head and remain sane in this business because I remain a kid off-camera.Leonardo DiCaprio

I've never been Romeo who meets a girl and falls for her immediately. It's been a much slower process for me each time I've gone into a relationship.Leonardo DiCaprio

My dad's probably one of the kindest people in the world. When I was younger that's not how I was- I was a little spoiled brat.Leonardo DiCaprio

My mom, Irmelin, taught me the value of life. Her own life was saved by my grandmother during World War II.Leonardo DiCaprio

My mother is a walking miracle.Leonardo DiCaprio

Raising awareness on the most pressing environmental issues of our time is more important than ever.Leonardo DiCaprio

The best thing about acting is that I get to lose myself in another character and actually get paid for it... It's a great outlet. I'm not really sure who I am - it seems I change every day.Leonardo DiCaprio

You do need parental guidance and I was in a great position with both my mum and dad. They split when I was a baby but even though I stayed with my mom they were both very much involved in my upbringing.Leonardo DiCaprio

Leonardo's birthday is in 176 days

Where is Leonardo from?

People born on November 11 fall under the Zodiac sign of Scorpio, the Scorpion. Leonardo DiCaprio is the 6th most popular Scorpio.

In general, Leonardo DiCaprio ranks as the 70th most popular famous person, and the 8th most popular actor of all time. “The Famous Birthdays” catalogs over 40,000 famous people, everyone, from actors to actresses to singers to tiktok stars, from serial killers to chefs to scientists to youtubers and more. If you're curious to see who was born on your birthday, you can use our database to find out who, what, where, when and why. You can search by birthday, birthplace, claim to fame or any other information by typing in the search box, or simply browse our site by selecting the month, the day, the horoscope, or any other clickable option.