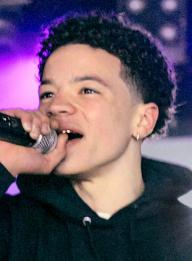 Title
Shot in The Phoenix Concert Theatre May 1st, 2018 in Toronto. Photography by Curtis Huynh for The Come Up Show.
Author
Source
https://en.m.wikipedia.org/wiki/File:Lil_Mosey_(41879461061)_(retouched)_(cropped).jpg
License
CC BY 2.0

Lil Mosey, born Lathan Moses Stanley Echols is a popular American rapper, recording artist, songwriter, and internet sensation who is noted for his hit singles, “Pull Up” and “Noticed”.

Details about his family have been kept private; however, he is known to have been raised by his mother.

His first commercial breakthrough, Pull Up garnered over 25 million YouTube views within about 16 months of its release.

Boof Back (2018) amassed over 13 million views within a year, while Noticed, his third single also released in 2018 accumulated approximately 10 million views two weeks after the music video was released.

He performed during the 2018 edition of Rolling Loud, an American music festival.

Since 2018, he has toured with several artists including Juice WRLD, YBN Cordae, Smooky MarGielaa, SmokePurpp, and Comethazine.

The hip-hop star began working on music while in 8th grade and signed a record deal with Interscope Records in 2018.

He was a student at Mountlake Terrace High School between 2016 and 2018, before dropping out to pursue music fulltime.

He has tattooed the word “Loyalty” on his right arm and he has another one on his chest with the inscription, “Thank God”.

Lil Mosey is a famous American rapper, who was born on January 25, 2002. As a person born on this date, Lil Mosey is listed in our database as the 3rd most popular celebrity for the day (January 25) and the 68th most popular for the year (2002).

People born on January 25 fall under the Zodiac sign of Aquarius, the Water Bearer. Lil Mosey is the 104th most popular Aquarius.

Aside from information specific to Lil Mosey's birthday, Lil Mosey is the 973rd most famous American.

In general, Lil Mosey ranks as the 1413th most popular famous person, and the 84th most popular rapper of all time. “The Famous Birthdays” catalogs over 25,000 famous people, everyone, from actors to actresses to singers to tiktok stars, from serial killers to chefs to scientists to youtubers and more. If you're curious to see who was born on your birthday, you can use our database to find out who, what, where, when and why. You can search by birthday, birthplace, claim to fame or any other information by typing in the search box, or simply browse our site by selecting the month, the day, the horoscope, or any other clickable option.