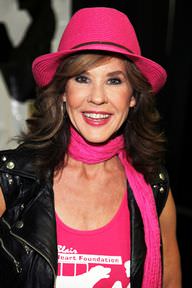 She is an American actress, who is noted to have appeared in the 1973 horror film, "The Exorcist", where she played the role of Regan, the possessed child. This film gathered so much recognition that it earned several nominations, including Academy Awards and Golden Globe awards.

Linda Blair came back in 1977 with her role on the continuation of the film, "The Exorcist II: The Heretic (1977).

She was born to James Frederick and Elinore Blair. Her siblings include Debbie and Jim Blair. She is noted to have been (at different times in her life) in romantic relationships with several top stars including Australian singer, Rick Springfield, Glenn Hughes (a bassist) and American actor, Wings Hauser.

She picked up a nomination for the "Best Actress" at the 1978 Saturn Awards.

Blair was awarded "Scream Queen" at the 1985 Golden Raspberry Awards.

She was named the "Worst Actress" at the 1986 Golden Raspberry Awards.

She began her career at the age of five.

Blair started riding horses when she was just six-years-old.

I was so sad from losing two of my dogs and my mother. I had this vision of all these animals sitting behind bars. They had no control and were scared. That's why I got into fostering and adopting animals out.Linda Blair

If I had children, I would be very selfish. I wouldn't be out doing things. But by not having kids, it makes me freer to travel the world and talk about things I feel are important.Linda Blair

Linda's birthday is in 52 days

Where is Linda from?

She was born in St. Louis, Missouri U.S..

People born on January 22 fall under the Zodiac sign of Aquarius, the Water Bearer. Linda Blair is the 2975th most popular Aquarius.

Aside from information specific to Linda Blair's birthday, Linda Blair is the 19426th most famous American.

In general, Linda Blair ranks as the 38036th most popular famous person, and the 3847th most popular actress of all time. “The Famous Birthdays” catalogs over 40,000 famous people, everyone, from actors to actresses to singers to tiktok stars, from serial killers to chefs to scientists to youtubers and more. If you're curious to see who was born on your birthday, you can use our database to find out who, what, where, when and why. You can search by birthday, birthplace, claim to fame or any other information by typing in the search box, or simply browse our site by selecting the month, the day, the horoscope, or any other clickable option.