Jamaica-born poet Linton Kwesi Johnson has gained lots of admirers due to his interesting poems which mostly address political issues. Since rising to fame in 1978, Johnson has produced many works which are usually in the Jamaican patois language.

His first collection titled “Voices of the Living and the Dead” was published by Race Today in 1974. Since then, he has issued many books with some titled “Mi Revalueshanary Fren” and “Tings An' Times”.

Aside from his poems, Johnson is also known for his career in the music industry. In 1978, he released his maiden album which was entitled “Dread Beat an' Blood”. In 1981, he established his own record label called LKJ Records. Through this label, he has issued some successful albums including “Tings an' Times” and “A Cappella Live”.

He studied at Tulse Hill School before graduating from Goldsmiths College in 1973.

The English PEN organization honored him with the Golden PEN Award in 2012. Two years later, he received Jamaica’s Order of Distinction award. He has also won the PEN Pinter Prize.

Before rising to fame, he worked as a writer for publications like New Musical Express, and Melody Maker.

He was a member of the British Black Panther Movement during his days in high school.

"Kwesi", his other name, originates from Ghana and is mostly given to Sunday-born male children. 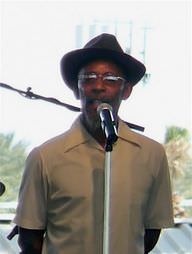 Where is Linton Kwesi Johnson from?

He was born in Chapelton, Jamaica.

People born on August 24 fall under the Zodiac sign of Virgo, the Virgin. Linton Kwesi Johnson is the 2284th most popular Virgo.

In general, Linton Kwesi Johnson ranks as the 26472nd most popular famous person, and the 91st most popular poet of all time. “The Famous Birthdays” catalogs over 40,000 famous people, everyone, from actors to actresses to singers to tiktok stars, from serial killers to chefs to scientists to youtubers and more. If you're curious to see who was born on your birthday, you can use our database to find out who, what, where, when and why. You can search by birthday, birthplace, claim to fame or any other information by typing in the search box, or simply browse our site by selecting the month, the day, the horoscope, or any other clickable option.