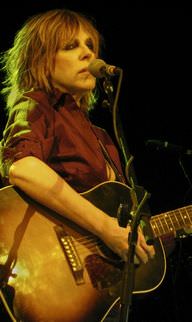 Lucinda Williams is one of the greatest American singers, songwriters, and musicians of her generation, best known for her genre-defying songs that spanned folk, country, and rock.

Her first two albums “Ramblin' on My Mind”, and “Happy Woman Blues” established her as a competent, if not extraordinary, folk-blues musician and since then she recorded a continuous stream of albums such as "Sweet Old World", " World Without Tears", and " Vanished Gardens" all of which have seen her exploring her creativity and her emotions.

She is a child of Miller Williams and Lucille Day. She grew up together with brother Robert Miller, and sister, Karyn Elizabeth.

She has been married to Tom Overby since 2012.

University of Arkansas is the institution she was educated at.

In 2002, The Time magazine called her "America's best songwriter."

She was awarded an Honorary Doctor of Music degree from Berklee College of Music.

Despite the fact that she never completed high school, she got accepted into university.

Back in the 1960s, I saw Peter, Paul and Mary. I was at that age, about 14, and I was mesmerized.Lucinda Williams

I just broke up with my boyfriend, and I've been spending more time alone than I'd like.Lucinda Williams

I'm not just a doormat. I'm not just being stepped on all over the place. If you look at the bulk of my material, it's about trying to find some strength through that.Lucinda Williams

If you come into success too soon, you'll burn out and be finished before you know it. If you let the maturation process happen naturally, you'll be happier with yourself in the end.Lucinda Williams

Just because I'm talking about something that might have been a sad or painful situation doesn't mean that I'm sad or tortured 24 hours a day any more than anybody else is.Lucinda Williams

Of course, I'm older now. I'm in a different place in my life than when I wrote the songs for 'Car Wheels' or 'Essence' or whatever. Different things were going on.Lucinda Williams

People let their own hang-ups become the obstacles between them and personal happiness.Lucinda Williams

Some of their best songs don't have bridges and choruses. So that made me think I should trust my instincts. My songs were okay, I figured. I didn't need to change anything.Lucinda Williams

You should put time into learning your craft. It seems like people want success so quickly, way before they're ready.Lucinda Williams

Lucinda Williams' birthday is in 54 days

Where is Lucinda Williams from?

She was born in Lake Charles, Louisiana, U.S..

People born on January 26 fall under the Zodiac sign of Aquarius, the Water Bearer. Lucinda Williams is the 1267th most popular Aquarius.

Aside from information specific to Lucinda Williams' birthday, Lucinda Williams is the 10427th most famous American and ranks 3rd in famous people born in Lake Charles, Louisiana, U.S.

In general, Lucinda Williams ranks as the 17436th most popular famous person, and the 1867th most popular singer of all time. “The Famous Birthdays” catalogs over 40,000 famous people, everyone, from actors to actresses to singers to tiktok stars, from serial killers to chefs to scientists to youtubers and more. If you're curious to see who was born on your birthday, you can use our database to find out who, what, where, when and why. You can search by birthday, birthplace, claim to fame or any other information by typing in the search box, or simply browse our site by selecting the month, the day, the horoscope, or any other clickable option.