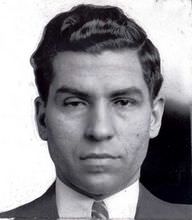 Lucky Luciano was an Italian-American mobster.

He is considered the father of modern organized crime in the United States and he is mainly responsible for the establishment of the first Commission, the governing body of the American Mafia, in 1931. He was also the founder of the National Crime Syndicate in the United States.

He was never married and he never wanted to have children. He had stated about that: "I didn't want no son of mine to go through life as the son of Luciano, the gangster". He had many relationships in his life, but he and dancer Igea Lissoni lived together for many years.

He has been portrayed by many actors in films and TV series, such as Stanley Tucci, Andy García and Telly Savalas.

Lucky Luciano's birthday is in 354 days

How old was Lucky Luciano when he died?

Lucky Luciano would be 125 years old if he was alive today.

Where was Lucky Luciano from?

He was born in Lercara Friddi, Sicily, Italy.