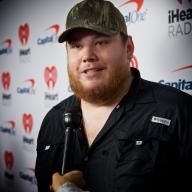 In November 2018, he and Nicole Hocking became engaged.

His debut album, titled, “This One’s For You” won him the “Top Country Album” at the Billboard Music Awards in 2019.

He received the “Song of the Year” award for his hit single, titled, “Beautiful Crazy" at the Country Music Association Awards in 2019.

He entered into partnership with music label, Sony Music Nashville.

Luke dropped out from Appalachian State University to pursue a career in music.

Luke's birthday is in 197 days

Where is Luke from?

He was born in North Carolina, U.S..