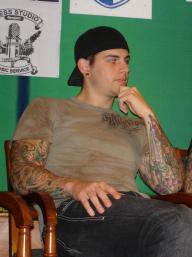 M. Shadows is an American singer famous for being the lead singer and one of the founding members of the heavy metal band Avenged Sevenfold (A7X), who are known for releasing such hits as Bat Country and Hail to the King.

He is the older brother of professional basketball player Amy Sanders. In 2009, he got married to Valary DiBenedetto and fathered multiple children with her.

According to him, he chose the moniker "M. Shadows" because he felt he was the "darker character" of the entire band.

In 2009, his school friend and bandmate James "The Rev" Sullivan was found dead at his home. He was 28 years old.

Where is M. Shadows from?

He was born in Huntington Beach, California, U.S..