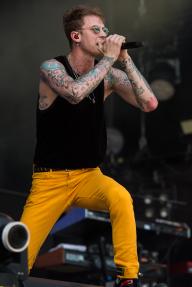 MGK, as he is simply known, is an American actor, songwriter, and singer who is known for his hardcore lyrics. He has a number of hit songs which include “A Little More” and “Till I Die”. His breakthrough came after releasing his maiden album, “Lace Up” in 2012.

His love for raps started at an early age and he produced his first mixtape in 2006. Over the years, MGK has completed a series of projects and has some number of albums to his name.

In 2011, he had the opportunity to work with renowned recorded labels such as Bad Boy and Interscope Records.

As an actor, he starred in a romantic drama titled “Beyond the Light” in 2014. He further went on to feature in movies such as “The Land” and “Roadies”.

MGK was born to missionary parents. He is known in private life as Richard Colson Baker. Due to the work of his parents, he spent most of his childhood outside the United States. In 2008, MGK announced his first child, Casie, whose mum is Emma Cannon.

He had a long-standing beef with Eminem and released “Rap Devil”, a diss song aimed at Em.

Where is Machine Gun Kelly from?

People born on April 22 fall under the Zodiac sign of Taurus, the Bull. Machine Gun Kelly is the 63rd most popular Taurus.

In general, Machine Gun Kelly ranks as the 787th most popular famous person, and the 46th most popular rapper of all time. “The Famous Birthdays” catalogs over 40,000 famous people, everyone, from actors to actresses to singers to tiktok stars, from serial killers to chefs to scientists to youtubers and more. If you're curious to see who was born on your birthday, you can use our database to find out who, what, where, when and why. You can search by birthday, birthplace, claim to fame or any other information by typing in the search box, or simply browse our site by selecting the month, the day, the horoscope, or any other clickable option.