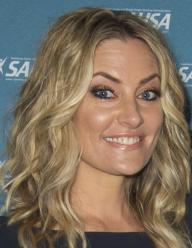 She is an American actress who is most prominent for her role in "Twin Peaks" (1990 - 1991) where she played  "Shelly Johnson". She also appeared on the film's prequel in 1992. The film's revival series was released in 2017, in which she also participated in.

Amick was encouraged by her parents to thrive and achieve her creativity. This fueled her to learn the piano, guitar, bass and violin. She soon moved to Los Angeles in 1987 where she began pursuing her career at the age of sixteen.

She was born to father, Bill Amick, who was a musician. Her mother is Judy Amick, a medical office manager. She got married to David Alexis on 16th of December, 1992. Their children include; Sylvester Alexis and Mina Tobias – she is a musician.

Amick got nominated for the "Best Actress" at the 1995 Saturn Awards.

She was also a contender for the "Outstanding Supporting Actress: Prime Time" at the 1991 Soap Opera Digest Awards.

She is of English, Irish, Swedish and Norwegian descent.

People born on December 12 fall under the Zodiac sign of Sagittarius, the Archer. Mädchen Amick is the 465th most popular Sagittarius.

Aside from information specific to Mädchen Amick's birthday, Mädchen Amick is the 3637th most famous American and ranks 1st in famous people born in Reno, Nevada, U.S.

In general, Mädchen Amick ranks as the 5660th most popular famous person, and the 710th most popular actress of all time. “The Famous Birthdays” catalogs over 25,000 famous people, everyone, from actors to actresses to singers to tiktok stars, from serial killers to chefs to scientists to youtubers and more. If you're curious to see who was born on your birthday, you can use our database to find out who, what, where, when and why. You can search by birthday, birthplace, claim to fame or any other information by typing in the search box, or simply browse our site by selecting the month, the day, the horoscope, or any other clickable option.