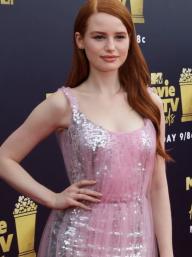 Madelaine Petsch, born Madelaine Grobbelaar Petsch, is a South African-American actress and YouTube star who is popularly known for her role as “Cheryl Blossom” in the television series “Riverdale”.

Petsch has a brother. She has been romantically involved with an American rapper named, Travis Mills.

In both 2017 and 2018, she won the “Choice Hissy Fit” category at the Teen Choice Awards for her role in “Riverdale”.

She also won the “Scene Stealer” award at the 2018 edition of the MTV Movie and TV Awards.

Her YouTube channel, which according to her was created to get her fans to know the real her, had gained over 5 million subscribers as of February 2020.

She is very active and popular on Instagram and her follower count as of February 2020 was 18.1 million.

Petsch began dance classes when she was only three years old and later started theatre classes two years after that.

Madelaine's birthday is in 44 days

Where is Madelaine from?

She was born in Washington, United States.