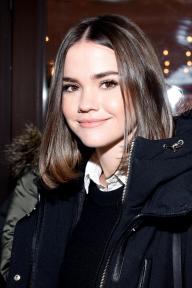 Maia Mitchell is an Australian actress and singer who gained recognition for starring as Brittany Flune in the Australian children’s television series, Mortified, and Natasha Ham in the teen drama, Trapped.

She earned massive fame and acknowledgement in the United States when she portrayed the character of McKenzie in the Disney movies Teen Beach Movie and Teen Beach 2.

Mitchell is also known for the role of Callie Adams Foster on the American family drama television series, The Fosters between 2013 and 2018.

Mitchell and her younger brother, Charlie, were raised by their father, Alex, a taxi driver, and mother, Jill.

She has been in a relationship with Rudy Mancuso, a YouTube star.

Between 2013 and 2019, Mitchell earned eight Teen Choice Awards nominations for her roles in The Fosters, Teen Beach 2, Good Trouble and The Last Summer.

She was also featured on some episodes of Jessie and The Lion Guard.

Maia's birthday is in 44 days

Where is Maia from?

She was born in Lismore, Australia.