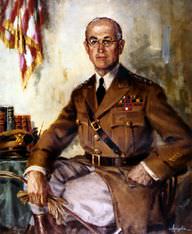 General in the United States Army

Malin Craig, a former US Army general, served as the 14th Chief of Staff of the US Army. Prior to that, he was a commandant of the Army War College.

This Missouri native graduated from the Military Academy in West Point in 1898.

After graduation, he was commissioned a second lieutenant. During the Spanish-American War, he got involved in the China Relief Expedition from 1900 to 1902. The year 1917 saw him become a major in the cavalry and soon after, a lieutenant colonel in the field artillery. In 1921, he became a brigadier general and the following year, became a major general and the chief of cavalry. In 1935, he was appointed general, and until 1939, he was the Army Chief of Staff. Later that year, he retired from active service.

In the course of his military exploits, he was honored with the Army Distinguished Service Medal.

Malin's birthday is in 306 days

How old was Malin when he died?

Malin Craig would be 147 years old if he was alive today.

Where was Malin from?

He was born in Saint Joseph, Missouri, U.S..