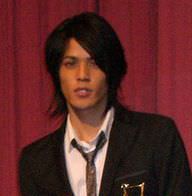 Mamoru Miyano was around nine years old when he got his career start in Japan’s television and film industry through the superhero television series, “Special Rescue Exceedraft” in 1992. After more live-action roles throughout the 1990s, he switched his focus to voice acting roles in anime, animated films and television shows, theatrical animations and video games.

Some of the most popular shows he has lent his voice to include “Death Note”, “Ouran High School Host Club”, “Soul Eater” and “Mobile Suit Gundam 00”.

He has an elder brother called Shota. He has been married with a son.

Miyano has been awarded at the Tokyo International Anime Fair and the Seiyu Awards.

Mamoru's birthday is in 185 days

Where is Mamoru from?

He was born in Saitama Prefecture, Japan.

What is Mamoru Miyano's height?