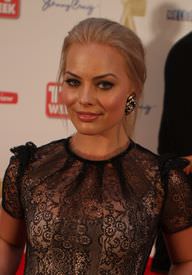 Margot is an Australian actress who began chasing her acting career from an early age. During her high school days, she earned the opportunity to cast in two local movies titled "Vigilante" (2008) and I.C.U" (2009) - which marked her first acting roles.

Margot made her television debut in 2008 as Catilin Brentford in a drama series named "City Homicide". She, however, skyrocketed to fame after playing a role in the comedy film titled "The Wolf of Wall Street"(2013).

Her father, Dough Robbie was a farm owner, while her mother, Sarie Kasseler worked as a physiotherapist. She wedded Tom Ackerley in 2016.

At the AACTA International Awards in 2018, she received the "Best Lead Actress" prize for her performance in "I, Tonya.

She was given the "Best Supporting Actress" award at the 2019 edition of the same event for her role in "Bombshell".

She picked up the "Best Female Newcomer" at the 2014 Empire Awards, UK, for her performance in "The Wolf of Wall Street".

She studied Drama at Somerset College.

The Australian actress has accumulated over 24 million followers on Instagram.

She purchased a tattoo gun on eBay

Margot is a fan of ice hockey and known to be a fan of the New York Rangers.

Margot's birthday is in 158 days

Where is Margot from?

She was born in Gold Coast, Queensland, Australia.

People born on July 2 fall under the Zodiac sign of Cancer, the Crab. Margot Robbie is the 1475th most popular Cancer.

Aside from information specific to Margot Robbie's birthday, Margot Robbie is the 288th most famous Australian and ranks 4th in famous people born in Gold Coast, Queensland, Australia.

In general, Margot Robbie ranks as the 14705th most popular famous person, and the 1748th most popular actress of all time. “The Famous Birthdays” catalogs over 40,000 famous people, everyone, from actors to actresses to singers to tiktok stars, from serial killers to chefs to scientists to youtubers and more. If you're curious to see who was born on your birthday, you can use our database to find out who, what, where, when and why. You can search by birthday, birthplace, claim to fame or any other information by typing in the search box, or simply browse our site by selecting the month, the day, the horoscope, or any other clickable option.