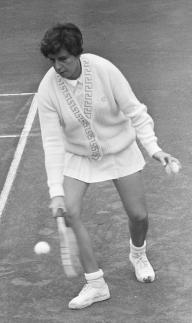 She was a Brazilian tennis player, whose 11-year playing career spanned between the 1950s and 1960s. During the course of her successful career, she is noted to have accumulated 19 Grand Slam titles – an achievement which made her South America's most successful female tennis player in history and also the only one to ever win Wimbledon.

Maria Bueno made history in 1960 for becoming the first female tennis player to ever win a calendar-year Grand Slam in doubles thus, all four majors in a year. She died in 2018 due to illness.

She received the "Jean Borotra Sportsmanship Award" by the International Club in 2003.

The centre court of the Olympic Tennis Centre in Rio de Janeiro was named after her in 2003.

Maria's birthday is in 70 days

How old was Maria when she died?

Maria Bueno would be 81 years old if she was alive today.

Where was Maria from?

She was born in São Paulo, Brazil.

Maria Bueno was a famous Brazilian tennis player, who was born on October 11, 1939. As a person born on this date, Maria Bueno is listed in our database as the 104th most popular celebrity for the day (October 11) and the 174th most popular for the year (1939).

People born on October 11 fall under the Zodiac sign of Libra, the Scales. Maria Bueno is the 2863rd most popular Libra.

Aside from information specific to Maria Bueno's birthday, Maria Bueno is the 276th most famous Brazilian and ranks 30th in famous people born in São Paulo, Brazil.

In general, Maria Bueno ranks as the 35518th most popular famous person, and the 148th most popular tennis player of all time. “The Famous Birthdays” catalogs over 40,000 famous people, everyone, from actors to actresses to singers to tiktok stars, from serial killers to chefs to scientists to youtubers and more. If you're curious to see who was born on your birthday, you can use our database to find out who, what, where, when and why. You can search by birthday, birthplace, claim to fame or any other information by typing in the search box, or simply browse our site by selecting the month, the day, the horoscope, or any other clickable option.