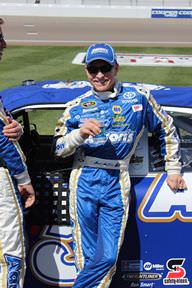 Mark Martin is a former car racer from America. During his career, he won the NASCAR Xfinity Series 49 times, which made him the second all-time winner in that league. He is a five-time NASCAR Cup Series second place holder.

According to the Entertainment and Sports Programming Network (ESPN), Martin is the best driver who has never won a championship.

He is a five-time International Race of Champions (IROC) winner. In 2005, he had 13 wins during the said championship, which made him reach the height of an all-time record holder in that series.

He is the child of Julian Martin and Jackie Estes. He got married to Arlene. Martin has four step children and one biological child.

During his career, Martin recorded forty wins in the Cup Series.

In 1998, his stepsister, stepmother and father were killed in a plane crash.

The first racing series he joined was the American Speed Association.

He was awarded the ASA National Tour Rookie of the Year in 1977.

In his NASCAR Cup Series career, he had 40 victories and was in the top ten 453 times.

In his entire NASCAR series career, he had 96 victories and made the top ten 625 times.

Mark's birthday is in 348 days

He was born in Batesville, Arkansas, U.S..

People born on January 9 fall under the Zodiac sign of Capricorn, the Sea Goat. Mark Martin is the 1346th most popular Capricorn.

Aside from information specific to Mark Martin's birthday, Mark Martin is the 10922nd most famous American.

In general, Mark Martin ranks as the 18345th most popular famous person, and the 43rd most popular race driver of all time. “The Famous Birthdays” catalogs over 40,000 famous people, everyone, from actors to actresses to singers to tiktok stars, from serial killers to chefs to scientists to youtubers and more. If you're curious to see who was born on your birthday, you can use our database to find out who, what, where, when and why. You can search by birthday, birthplace, claim to fame or any other information by typing in the search box, or simply browse our site by selecting the month, the day, the horoscope, or any other clickable option.